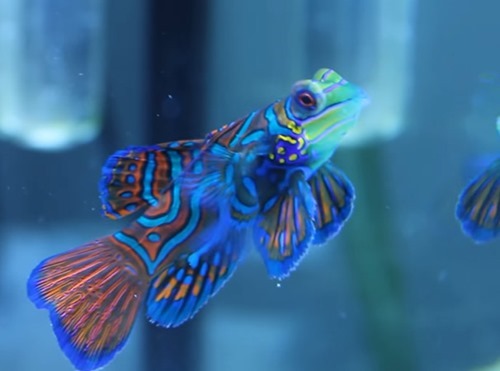 Mandarins are easily one of the most recognizable fish in the saltwater kingdom. Their bold, psychedelic colors and patterns (reminiscent of album art in the 60’s) will definitely get people talking! They’re beautiful fish with an equally lovely personality!

Other names for the mandarin goby are mandarin dragonet, psychedelic goby, and green mandarin fish. Although sometimes listed as a goby, mandarins are a type of dragonet (as are scooter blennies), they’re not a goby at all.

They will interact with people to a degree, but for the most part, they go about their business, pecking for pods, ignoring most of what goes on inside and outside the tank. Our mandarin has been with us for almost a year and has quickly become one of our favorite fish. He’s very low key and laid back with a live and let live sort of attitude.

Dragonets sleep in the sand, sometimes even partially burying themselves. When the lights first come on, your mandarin may appear somewhat gray, this is normal and nothing to worry about.

Red mandarins are much harder to come by, but they are a red variant of the green mandarin. The red in their stripes and pectoral fins will be wider and more pronounced than what is seen on the greens.

Several people have asked about ORA mandarins. ORA mandarins are fish that have been captive bred and are trained to accept not only frozen but also dry foods as well. We have read mixed reviews regarding the validity of these claims, but since we have had no experience with them we can form no opinion.

Sexing mandarins is fairly straightforward. The first dorsal spine on the male will be more elongated than on the female. Males are also larger than their female counterparts.

How to buy healthy mandarins? 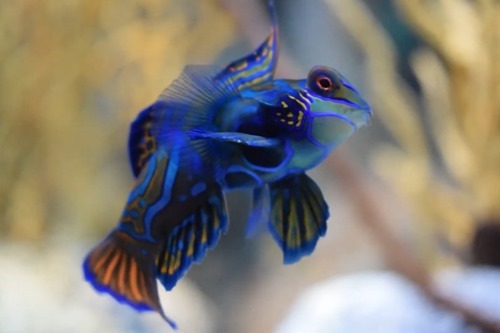 When purchasing a mandarin, ask the salesperson whether or not the mandarin will eat frozen food. If she/he says yes, then politely ask them to feed it in front of you. If it won’t eat, and you don’t have a pod population to sustain it, then don’t buy it.

If you have pods of plenty, then we would categorize this fish as easy to maintain. They’re quite hardy and resistant to many of the diseases that seem to plague other fish.

If the fish looks emaciated, take a pass. Your first inclination might be to rescue the fish, but more often than not, the mandarin is too far gone and all your hard work will be in vain.

When spooked or stressed the mandarin goby will slough off tons and tons of a viscous, slimy, gel-like, substance. It is unbelievable how much there is! Needless to say, it is best to avoid these types of situations. This video that someone posted on youtube; you can see for yourself just how much slime one of these fish can produce!

Should you need to move your mandarin, rather than using a net, try to capture him in some sort of container, then transfer both mandarin and container to the new tank. This method has worked out very well for us.

Although mandarins are resistant, they are not immune to marine ich (cryptocaryon). Due to the scaleless nature of mandarins, copper should not be used as part of their treatment. Hyposalinity is a far safer, easier, method to treat this disease. 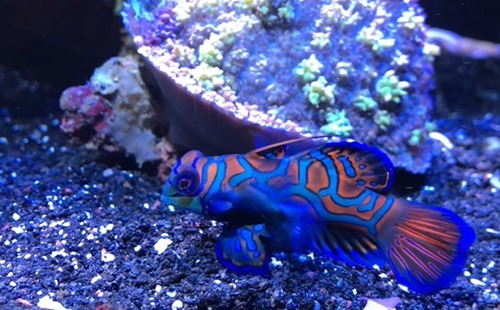 A well established, 30-gallon tank that includes live sand, plenty of caves for hiding, and enough live rock (approximately 1 lb per gallon) to sustain a population of copepods. You might be saying to yourself that the tank seems large for a fish this size. At first glance, you would be correct, but it’s not about size, it’s about diet.

The mandarin is not a zippy fish (it is a fairly lazy, methodical, swimmer), so it doesn’t need a bunch of swimming room, but it does need a tank large enough to contain the live rock required to keep a pod population going. Having a sump is also quite beneficial.

A cover for the tank is pretty much a necessity since mandarins are excellent jumpers.

The mandarin is a peaceful fish and should be housed with like-minded tankmates. Some suitable choices are angels (dwarf and large), anthias, butterflies, boxfish, clowns, chromis, cardinals, shrimp, crabs, and some species of gobies.

As always, use caution and common sense when introducing new fish. They will, however, fight with one another, so a single mandarin or a bonded pair is all you should have in the tank.

If mandarins are being discussed, then you can bet, so is their diet. It can not be stressed enough how important live food is for these beautiful creatures. Ensure your tank has enough copepods for them to feed on.

Your mandarin will still need other sources of nutrition in the form of live blackworms, enriched live baby brine shrimp, amphipods, copepods, etc. As a supplement, we have good luck with Nutramar Ova, but this should not be used as a staple.

Even if you have a sufficient amount of pods, we think it’s a good idea to train your mandarin to accept frozen foods “just in case.” This can be done in any number of ways – breeder boxes, food hotels, etc. For a more detailed description on how to train your mandarin, check out this magazine.

As for frozen food, in addition to the above-mentioned Nutramar Ova, we have trained ours to accept mysis shrimp, brine shrimp, bloodworms, and cyclops. Ours are not a big fan of cyclopeeze but they will pick at it on occasion.